According to one version of the incident, the assault originated in a dispute between a Christian named Asghar Masih and a Muslim called Dilshad Dogar, although other reports deny that this was the motive.

In the afternoon of September 6, Dogar reportedly approached Asghar’s house along with several armed young Muslims. Not finding Asghar at home the gunmen began firing at the church building and then opened fire on Christians’ houses.

The gunfire wounded five Christian women, one of whom was pregnant, as well as one man, Asif Masih, who was shot in both legs when returning home from work.

The Barnabas Fund noted that three of the six victims are in a critical condition.

“When I was telling my kids to get inside, I saw a group of heavily armed men firing indiscriminately at a church located on the street,” Masih told Morningstar News. “They then trained their weapons on the homes of neighboring Christians and fired volleys of bullets at them.”

“I barely managed to drag myself into my house and locked the gate, but they did not stop firing,” Masih said. “I could hear them shouting that they would not spare Christians living in the area and would also burn down our church.”

“One of the injured women is six months pregnant,” he added. “She was hit in the leg by one of the several bullets fired at their gate, but fortunately her family members were able to secure her inside.”

Local police arrived at the scene hours after the incident but eventually arrested ten suspects, including Dilshad Dogar, Butt Gas Wala, and Chand Khencha, who are being charged with attempted murder and rioting with use of deadly weapons.

Pakistan stood at number 5 on the 2021 World Watch List, an index of Christian persecution in countries around the world, compiled by the Christian aid organization Open Doors. 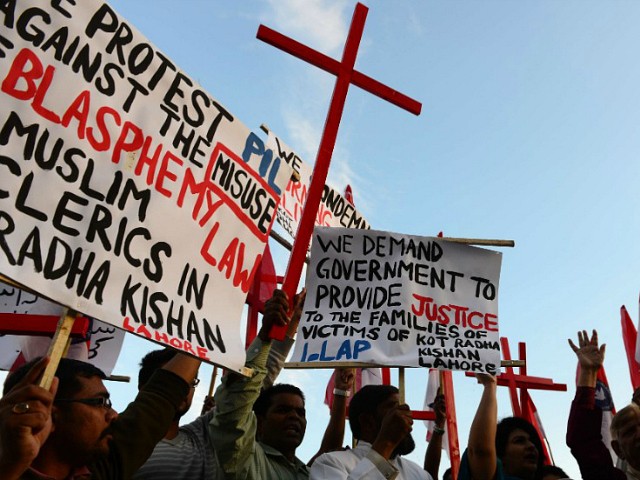 Pakistani Christians shout slogans in protest against the killing of Christian couple in Islamabad on November 5, 2014. An enraged Muslim mob beat a Christian couple to death in Pakistan and burnt their bodies in the brick kiln where they worked for allegedly desecrating a Koran, police said. (FAROOQ NAEEM/AFP/Getty Images)

“Christians in Pakistan face extreme persecution in every area of their lives, with converts from Islam facing the highest levels,” Open Doors declared, and “all Christians are considered second-class citizens, inferior to Muslims.”

“Increasingly, Christian girls are at risk of abduction and rape, often forced to marry their attackers and coerced into converting to Islam,” the group said.

Open Doors also noted that “Pakistan’s notorious blasphemy laws are used to target Christians, and Islamic extremist groups vehemently ‘defend’ these laws, including attacking or killing those believed to have contravened them.”

This entry was posted in Politics and tagged Muslim crime. Bookmark the permalink.