Countries ‘Emptying Their Prisons’ into U.S. Thanks to Biden

Trump said during his rally in Cullman, Alabama:

In a matter of mere months, Biden has thrown our southern border wide open. When I left office, we handed the new administration the most secure border in U.S. history and they turned it into the greatest border disaster in American history, probably anywhere in the world. 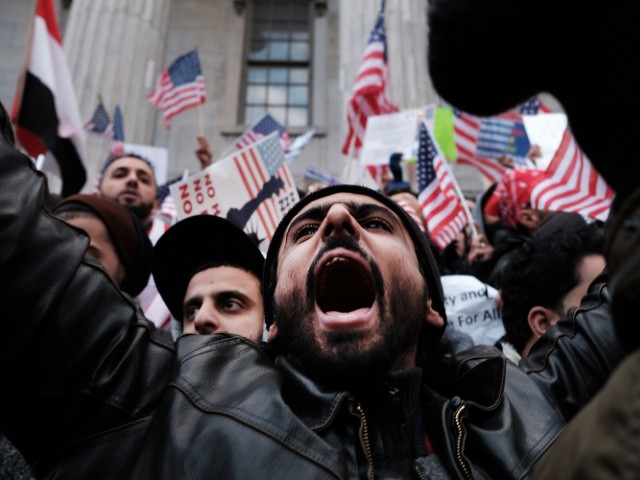 NEW YORK, NY – FEBRUARY 02: Ethinic Yemenis and supporters protest against President Donald Trump’s executive order temporarily banning immigrants and refugees from seven Muslim-majority countries, including Yemen on February 2, 2017 in the Brooklyn borough of New York City. At least 1,000 Yemeni-owned bodegas and grocery-stores across the city shut down from noon to 8 p.m. today to protest the order. (Photo by Spencer Platt/Getty Images)

Under my administration, we ended the ridiculous Catch and Release. You catch somebody, you find out they’re a criminal and you release them immediately into our country. We ended asylum fraud, we deported record numbers of criminal aliens, we negotiated historic agreements with Mexico and Central America to stop illegal immigration. And we built all of that wall that I just talked about. But we had a stay in Mexico policy. You can’t come into our country, I’m sorry. Stay in Mexico. Biden ended it, he ended it. But you know what happened? Yesterday we won in court and a very wise judge said we’re allowed to have stay in Mexico. Thank you, judge. 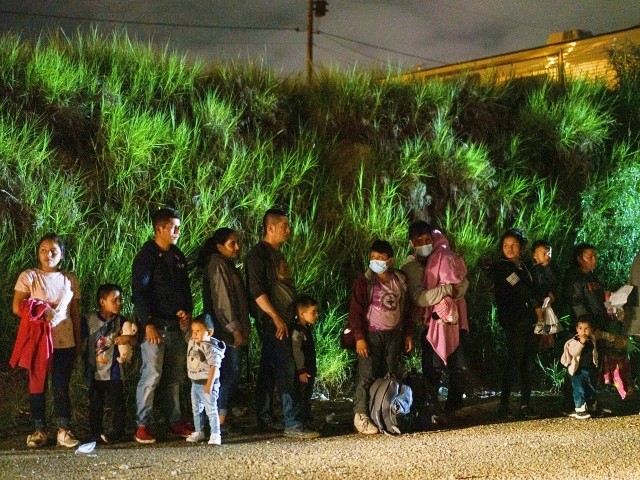 Migrant families are lined up after crossing the US-Mexico border into the United States in Roma, Texas on July 9, 2021 – Republican lawmakers have slammed Biden for reversing Trump programs, including his “remain in Mexico” policy, which had forced thousands of asylum seekers from Central America to stay south of the US border until their claims were processed. (Photo by PAUL RATJE / AFP) (Photo by PAUL RATJE/AFP via Getty Images)

“Late Friday evening, Biden’s DOJ applied to Justice Samuel Alito, requesting that SCOTUS block reinstatement of the Migrant Protection Protocols (MPP), commonly known as Remain in Mexico, until the case makes its way to the court — a process that could take more than a year,” the article read.

Meanwhile, the nation’s television networks have nearly stopped covering Biden’s unpopular mass migration crisis at the southern border, according to a study from Rich Noyes at the Media Research Center (MRC).

“The illegal immigration influx along the U.S. southern border has worsened every month since President Biden took office, but the liberal broadcast networks have essentially stopped covering the crisis,” report stated.

This entry was posted in Politics and tagged MAGA, Trump. Bookmark the permalink.