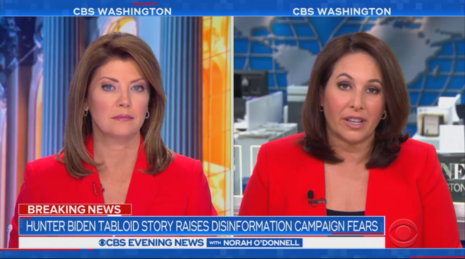 After kicking off Thursday by downplaying the bombshell New York Post report exposing alleged corruption by the Biden family as just President Trump trying to rehash “an old attack line,” the CBS Evening News knew it wasn’t sticking and shifted gears. No longer questioning the veracity of the emails and other disturbing discoveries, chief congressional correspondent Nancy Cordes took to arguing, without evidence, that the information was stolen from Hunter Biden by the Russians to tilt the election.

On top of that, the network cheered the efforts of social media giants Facebook and Twitter to censor the story and keep it from spreading. This was how anchor Norah O’Donnell touted their efforts:

And tonight, the Trump campaign is accusing Twitter and Facebook of censorship after the social media companies blocked the spread of an unverified story about former Vice President Joe Biden’s son and a laptop allegedly full of his old e-mails. It’s a story raising concerns about whether it’s real or just designed to sow confusion in the final weeks of the election.

At the top of her report, Cordes laid the groundwork to defend Hunter by suggesting his information was hacked. “Experts say it has all the hallmarks of information laundering and all the headaches of 2016,” she announced, drawing comparisons to WikiLeaks and Hillary Clinton. “This time, it’s a tabloid newspaper dribbling out e-mails, purportedly swiped from Vice President Joe Biden’s son.”

Despite Cordes’s claims, the Post story clearly states that the information had come from a computer turned over to a repairman last year. And in interviews with Fox News, the repairman says it’s Hunter was the one who gave it to him and he failed to pick it up after 90 days.

From there, Cordes suggested that Trump lawyer Rudy Giuliani had gotten the information of a Russian agent. She then brought on “a former FBI operative” to back up her argument baseless claim that the information was stolen by Russians and put on bait computers:

ERIC O’NEIL (national security strategist, VMware): Steal the information with a cyber-attack, get the e-mails from Hunter Biden’s account, and then put them on these laptops that are left at a repair store, and that’s how the information is now laundered into the public.

CORDES: Who do you think is behind this?

O’NEIL: Well, the Russians would be my number one guess. If I had to guess.

With her again comparing it to 2016, Cordes boasted about how “this time, social media outlets were quick to limit the spread of the story.”

She added: “Twitter briefly suspended the accounts of the Trump campaign and White House press secretary after they tried to share it. The campaign threatened to sue as allies on Capitol Hill cried censorship.”

Cordes closed out by opining that “the goal of these incidents appears to be the same” as 2016, “to cast a cloud over the front-runner in the closing weeks of the campaign using a drip, drip, drip of e-mails that create the air of scandal,” even though there supposedly wasn’t one.

This entry was posted in Politics and tagged Corrupt MSM. Bookmark the permalink.